Voltron: Defender of the Universe
From days of long ago... 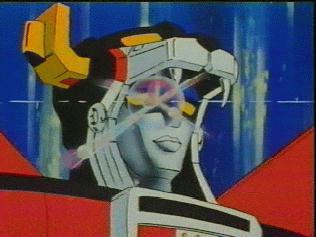 ...from uncharted regions of the universe, comes a legend... the legend of Voltron, Defender of the Universe... a mighty robot -- loved by good, feared by evil.

When I was 6 Years old, I used to watch Voltron along with My brother. Back then, I really didn't understand the show. I only watched it to see the Lions in action. My brother also owned the Voltron toy, that is, the set of 5 lions. Today, I have the set, which I bought. I'd like to give think to Trendmasters and World Events Productions (WEP) for rereleasing these toys. Also a thanks goes out to Cartoon Network for bringing this great show back on the air where it belongs! :) I still like watching the Lions, by the way, hopefully I get to fly one someday. :D

At first, I didn't pay attention to the show, but over a few month I because more and more interested in finding out what Voltron is all about, and now I know a lot about it. I know the chatacters, the storyline, and best of all, I have the toys again! By the way, the only Voltron toy available now is the Die-Cast Metal set with the 5 lions. The Lions are not yet sold separately.

With Voltron back on the air and the toys back on the shelves, Voltron could become a hugely successful show as Ninja Turtles or power rangers. We'll have to see if this cartoon has what it takes to make it to the top. Only time will tell. But I can see Voltron has a good chance of making it!

What could the success of Voltron bring? Well, I can list a couple of things right now. :)
If the toys and the show do become a good success, World Events Productions might make a whole new season for Voltron -- ones never seen before in the 80's. Their should also be Voltron books and novel so You can actually read about the show. We might also see Voltron video game we can play and enjoy, preferably on the Nintendo 64, the hottest Video Game system their is! Well, this is only a dream right now, but hey! It can come true!

Their is another page on the rerelease of the Voltron Toy which has a couple of pictures of the box, if You'd like to check out this page, Click Here. You won't be disappointed. :)

Please note: I borrowed this HTML page from another voltron webpage somewhere on the web, It still has Voltron Team Members' pictures and profiles, and I know a couple of these profiles are not Mine (Please forgive Me), I will be changing them to My own when I have the time.

This is the story of the superforce of space explorers, specially trained and sent by the Alliance... 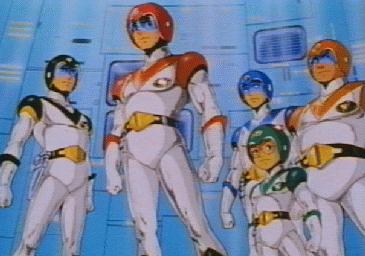 The Voltron Force was five of the toughest young space explorers in the galaxy. All five of them have extraordinary fighting (both hand-to-hand and dogfighting) skills; all five were top of their class in the Academy. At first detained and made slaves for the sport arena on Planet Doom, they escaped to fufill their mission -- travel to Planet Arus and resurrect the mightiest robot in the galaxy -- Voltron, Defender of the Universe. From left to right: Sven, in black; Keith, in red; Lance, in blue; Pidge, in green; and Hunk, in orange. (Hunk and Pidge are My favorites because they've got a great sense of humor :) )

Every member of the Force is different. They each have a distinct look and personality separating them from the others, and yet combined they work well as a team, much like their Lions. To run through each of the Force individually...

Keith, with the rank of Commander, is the leader of the team. Arguably the best-looking (my opinion... ;) ), He has long, unruly black hair that reaches well past His shoulders and large, dark eyes. He pilots the Black Lion, the Lion that forms the head and torso of Voltron. His color, no matter whether it's His uniform or His usual clothes, is red. He happens to be the only one of the Force who actually wears a uniform as His "street clothes," being the one in command. Keith trusts His instincts first, which can lead Him to be very mistrustful of some. They can also lead Him into dangerous situations, though Keith will usually (emphasizing the "usually") think before He acts. He rarely admits defeat -- He has a never-say-die personality. He has a good head for leadership, usually maintaining an outer calm -- but once He's pushed past the limit, He won't hesitate to fight and fight like a tiger. Lance, with His all-American-boy looks, seems to have become second-in-command on the team when Sven was injured. He has collar-length brown hair and brown eyes. He pilots the Red Lion, the right arm of Voltron, the one most often handling the sword. Lance has a quick temper and tends to be the loner of the team, though He and Keith are best friends. His mouth can get Him into trouble a lot -- He has a tendency to say things without thinking. He also is the first to come up with a joke or a wisecrack in any situation. Case in point: in one episode, the Force is caught in a tree monster's vines, and Lance is the only one free. He flies into view saying over the comlink, "Hi, guys... got that tangled up feeling? Dr. Lance has got the answer." His clothing, with His leather jacket, turtleneck and light brown pants, is a show of His casual, accept-Me-as-I-am personality. Lance refuses to go out of His way to impress others. He's definitely not one of the cooler heads on the team -- He's second most likely, after Hunk, to start a fight. His instincts are keener than most; He's usually the one to uncover a liar or a fake before the others (such as Prince Bokar, who tried to charm Allura and turned out to be a robeast).

Pidge is the smallest member if the group. He's very easygoing most of the time and has a great sense of humor. He is close friends of Hunk. Pidge tries to keep Hunk out of trouble. Both Hunk and Pidge do get along well, though. He also learned to communicate with Princess Allura's friends the Space Mice. He usually plays with them and tells them stories. Pidge is the pilot of the Green Lion, which forms the left arm of Voltron.

When He has the time, He hosts a few chatrooms on AOL and does it pretty well. His screen name is ABCHostPDG.

Sven is the former pilot of the Blue Lion before He was severely injured in a battle with King Zarkon's evil witch Haggar. After Sven was injured, He was taken to a hospital on another Planet. He later returned when Princess Romelle, cousin of Princess Allura, met Him in a cave on the Planet Doom, where King Zarkon lives.

According to My opinion, another incident occoured to Sven while He was visiting New York City on Planet Earth after He helped the Voltron Force defeat King Zarkon. It all started when Sven was in the Subway waiting for the Downtown Number 6 Train to arrive at the station. Suddenly, Haggar appeared and She pushed Sven onto the tracks below the platform. Sven landed inches away from the electrifed Third Rail, which contains 600 volts of live electricity and powers the trains. Sven tried to save Himself, but Haggar was too powerful. He did, however, move as far away from the third rail as possible, but He was still fighting for His life. He knew a train would come any minute and if He didn't get off the tracks, He'd be run over by the number 6 train. Luckly for Sven, when Haggar heard the train arriving, She disappeard and Sven climbed to safety. Seconds later, the train arraved and Sven boarded the train. He never imagined how lucky He would be when His life was saved by the sound of the train arriving.

Sven is peace-loving, and as far as I know, He is, or He used to be a Norwegian captain As the mechanic/engineer of the group, He repairs the lions when needed. He is the strongest and also the biggest member of the team. He gets along with children which is probably why His closest friend is Pidge. Pidge usually tries to keep Hunk out of trouble.
Hunk also has quite an appetite! You'd probably see how He like eating when the team is feasting on a meal. Once, He was so hungry that at the first victory feast for Voltron on Arus, Keith tells Him when He begins to eat, "I didn't mean dig in like a shovel."
He also has quite a temper, which is probably why He might say, "That makes Me so mad!" when He gets angry. Fortunately, He's usually in a good mood.
Hunk pilots the Yellow Lion which becomes the left leg of Voltron.